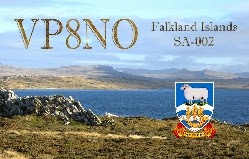 I monitored Mike for quite a while and he worked a lot of SV Stations. Later, I received a phone call by my good friend Lampros, SV1LK in Athens, who congratulated for my new one and told me that during his QSO with VP8NO, Mike mentioned that propagation was so precise, that it was like you had a wire connecting GREECE with the Falklands !!
Mike is also using LotW, so this new one ﻿will be confirmed easily, too !!
VP8 has been my 92nd DXCC worked on 6m, a few more to go ...
﻿
Composed by Efstathios Maliakis, SV5DKL at 3/20/2014 09:12:00 AM